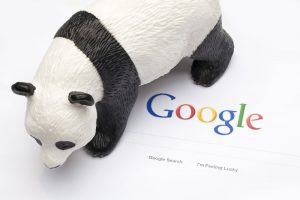 As a webmaster, you might have heard of two of the most important parts of the core Google algorithm: Penguin and Panda. Penguin looks at the quality of incoming links. Panda, on the other hand, takes the opposite tack and looks for low-quality content on the site.

Panda was initially introduced to deal with the issue of the vast number of content farms populating the internet at the time. It has now evolved to become part of the core algorithm and is now running continuously. The side effect here is that it makes it harder to know when a site has been penalized for a Panda violation.

It was also initially rumored to consider user-generated content such comments into consideration. This is not true and Panda only looks at the content on the page. Another myth was that of the length of the content. Numbers like 250 words or 350 words were thrown about. This also appears to be wrong as Google recommends that the word count should reflect the needs of the content in question. There are sub-100 word posts that rank at number one along with featured snippets.

What we do know is that first of all the content should match the query. If the title of the page or the anchor text of an inbound link does not match the content, then this could be an issue. In that case, it would be better to add a paragraph or two adding relevance in order to avoid getting penalized.

Going forward, create high-quality content and you will have nothing to worry about.